Essar returned as the headline sponsor of this year’s Cheshire’s science festival ‘Amazed by Science’. The event was incredibly well-attended during the half term holiday with thousands visiting the festival over the May break. The schedule was packed with more than 100 hands-on activities aimed to inspire young people to take an interest in science and engineering and this year organisers were hoping to attract an even higher number of females. Young girls are traditionally more difficult to attract into STEM careers, and so it is hoped that events such as this will inspire a generation of scientists for the future. 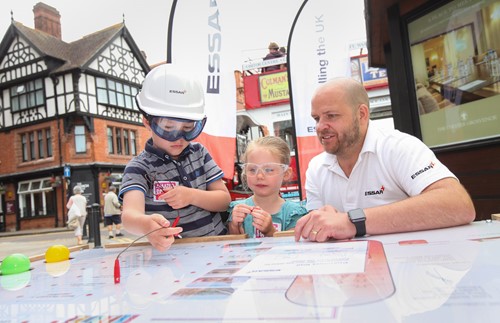 Events took place across the county at 10 different venues over the 9 days. As part of the sponsorship, Essar hosted three events. Two of these were in the Ellesmere Port Arcades shopping centre, close to the Stanlow refinery, and one was joining other sponsors in Chester's Town Hall square, which saw more than 500 people in attendance. The events were a great opportunity to engage with our local communities, and to support the development of interest in STEM subjects at a young age.

Other festival highlights were the dramatic sinking and floating experiments at The Anderton Boat Lift in Northwich, children exploring ‘the science of poo’ and other messy animal behaviour with Zoo Rangers at Chester Zoo and little ones getting to meet a real life astronomer at Jodrell Bank. Further well-attended locations were Catalyst Science Discovery Centre in Widnes, The Lion Saltworks in Northwich, The Port Arcades in Ellesmere Port, Golden Square Shopping Centre in Warrington and the community events held at Crewe Library.

Katrina Michel, Chief Executive of Marketing Cheshire said: “We were absolutely delighted with the high attendance during the festival, with thousands of families coming out during the half term to have some wonderful fun together with science. Also so many families were exploring venues for the first time and appreciating the fantastic facilities and attractions we have available in this science-rich county. Now we can’t wait to plan our 2019 event with the support of our sponsors, to make it even bigger and better.”

Ian Cotton, Head of Communications at Essar Stanlow said:  ‘We were delighted by the response to the Amazed by Science events with families coming out in their thousands to our sponsor events,  with over 500 people making it to the Chester city centre event alone and hundreds heading to see us at The Port Arcades in Ellesmere Port. We were bowled over by the enthusiasm and excitement at those events, and it’s been fantastic to see children learning so many new skills and taking in the information in such an interactive way. The venues and locations were well-chosen and we hope that families enjoyed the experience as much as we did.”