Essar Oil UK today announced a new agreement with top independent MPK Garages to rebrand and supply an initial tranche of twelve sites.  The deal, which is the biggest secured by the Essar team to date, will see the company network expand to 67 stations and include the first rebrand of a BP site. 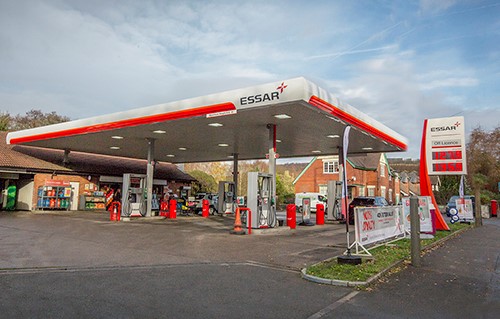 Under the new agreement, the first Essar site was officially launched this morning at Riverside in Belper, Derbyshire.  The 3ml pa station, previously under the BP marque, will be followed by a further eleven sites that will be rebranded by the end of November.  The twelve new sites range from Worcester to Doncaster in South Yorkshire.  MPK have also entered into a franchise agreement with Morrisons, which will see the addition of Morrisons Daily convenience stores at most MPK sites.

Essar Oil UK Chief Executive, S. Thangapandian, commented:  “This is a defining moment for the Essar retail proposition in the UK.  Our team had been working with the new owners of MPK, Stratford Retail Group Limited, ahead of their acquisition of these sites and we were delighted to reach agreement to support their plans to transform the business.  At an average of 3ml pa, this is exactly the right platform for our retail offering and with guaranteed quality supply, we also expect to be able to expand our range of premium fuels through this estate.  The new MPK partnership with Morrisons is very exciting and will see investment over the coming months to further improve the customer experience.”

Nerissa Haskic, Director of Stratford Retail Group Limited said:  “Our business plan is focused on transforming and expanding the retail business and we felt that the partnerships with Essar and Morrisons could best support our strategy and underpin growth.  There is a great working relationship between our companies, with Essar demonstrating they have both the capability and the ambition to support our growth in the UK.  They were a logical choice for us, with an outstanding brand image, product range and quality.  We expect to experience strong growth in fuel volumes and retail sales and our Managing Director, Paul Kershaw and the MPK management team are very excited about this project.”