Essar takes up the Chester Half Marathon Baton

It was announced today that Essar Oil UK (Ltd) is to become the new title sponsor of the North West’s most popular Half Marathon. 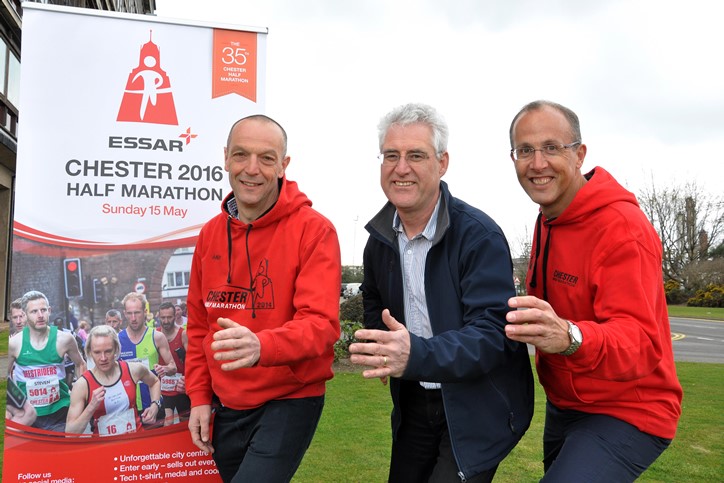 The classic Chester Half Marathon is now in its 35th year, and was taken over by Active Leisure in 2012. Under the guidance of directors Andy White and Chris Hulse, Active have worked tirelessly to explore ways to give more runners the opportunity to take part, and to enhance their experience of the event.

Essar owns and operates the Stanlow Manufacturing Complex, which produces 16% of UK road transport fuels. Large sections of the nation’s road, rail and air transport sectors rely on the quality, expertise and guarantee of supply provided by Stanlow. As well as supplying many of the major oil company high street retail brands and supermarket outlets, Essar has also recently entered the UK retail sector. With four service stations currently operating under the Essar name, the company has ambitious plans to grow the business into a national network of branded sites.

Chris Hulse, Joint Race Organiser & Commercial Director, said: “We are delighted to welcome Essar as title sponsor for the race. The valuable support of Essar secures the future and on-going development of a race that draws people from all over the country as well as producing some impressive elite competition.”

“Since taking over the race we have radically overhauled the route to increase the capacity of the event. The 13.1 mile route takes runners from the Racecourse on traffic free roads, through the city centre and out through Mollington and Saughall, returning to Chester for an amazing city centre finish. The course allows up to 7,000 runners to take part, and such is the popularity of the race that even at that level the race still sells out every year.”

Naresh Nayyar, Essar Oil UK (Ltd) Executive Chairman, commented: “The Chester Half Marathon is a long established and high profile event, which over the years has grown increasingly popular within the running community,”

“As a major regional employer, we are pleased to be able to support such a well-known local event and look forward to working with the race organisers on the continued development of the race to provide the best possible experience for all those taking part.”

Race Director Andy White added: “We have been delighted with the feedback that we get from runners, especially about the spectacular finish by the Town Hall and Cathedral which has also done much to create an unforgettable experience for the athletes. This year, in response to runner requests, we have modified the route to take them through more of the city at the start of the race. As Chester residents ourselves, we are proud of our home city and enjoy the opportunity to show off its great heritage.”